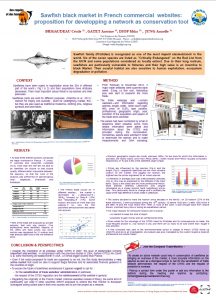 A poster was presented at the European Elasmobranch Association Meeting in Milan in November.

Sawfish family (Pristidae) is recognized as one of the most imperil elasmobranch in the world. Three of the five species are listed as “Critically Endangered” on the Red List from the IUCN and some populations considered as locally extinct. Due to their long rostrum, sawfishes are particularly vulnerable to fisheries and their high value is an incentive to black Market. Their coastal habitat are also sensitive to human exploitation, ecosystem degradation or pollution.

Des Requins et des Hommes is focused on Sawfish Internet Trade on French websites and would like to develop an international cooperation in Europe.

You could fill in the form to participate to this network and send it to us by email.

Thanks for your participation